Easter joy fills halls and hearts around the territory 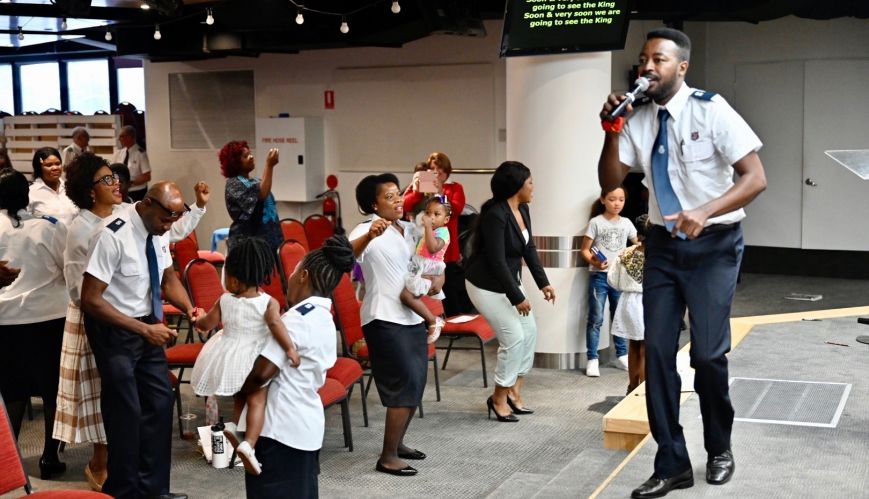 Easter joy fills halls and hearts around the territory

Auburn Corps in Sydney had plenty to celebrate on Easter Sunday after nine senior soldiers were enrolled.

By Jessica Morris and Darryl Whitecross

There is no shortage of joy for Salvos on Easter Sunday. After experiencing a virtual Easter last year, corps and centres across the country met face to face this year – and the sacred weekend was filled with everything from Easter bonnets and soldiership enrolments to meaningful reflections and spontaneous dancing. 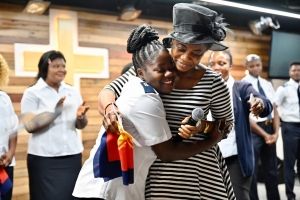 The Easter Sunday service at Auburn Corps featured the enrolment of senior soldiers.

There were lots of reasons to celebrate at Auburn Corps over the Easter weekend. The predominantly multicultural corps not only celebrated the resurrection of Christ but also enrolled nine senior soldiers and held its first Chinese service.

The first Chinese service was held on Saturday after a local Chinese church started using the Auburn Corps hall. It featured a stirring sermon from Corps Officer Captain Ashish Pawar, which was translated into Mandarin by Brother Lei Xiong.

Come Sunday, and Adrian Kistan preached a fiery word and celebrated the new soldiers enrolled who represented countries including Liberia, Sierra Leone, Nigeria, Bangladesh and Burundi. Spontaneous praise through dancing then took over, with adults, kids and even a pet dog celebrating. How’s that for a miraculous Easter Sunday!

In Canberra, Tuggeranong Corps rejoiced with praise, worship and a chocolate Easter egg hunt! Majors Paul and Wendy Hateley were guest speakers at the Easter Sunday dawn service and then used the theme ‘More than a Carpenter’ for the morning church service.

A beautifully decorated cross became the focal point of the service, which Corps Officer Captain Roz Edwards invited people to gather around afterwards.

Throughout Holy Week, these crosses were lit, inviting the public to remember the spiritual significance of Easter.

“This is a visual image for people when they drive by to be reminded what the real meaning of Easter is,” said Corps Officer Major Debbie Serojales. Sunraysia Corps invited the community to the Good Friday and Easter Sunday services. And, naturally, they topped off the weekend with an Easter egg hunt.

On the Bellarine Peninsula, The Salvation Army participated in a combined churches ‘Walk of Witness’ in Drysdale. The walk was facilitated by the Uniting and Anglican churches, where Joel, a member of the Salvos community with aptly ‘Jesus-like hair’, carried the cross. 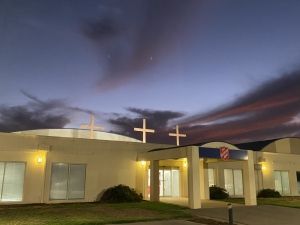 Three handcrafted crosses on the roof of Sunraysia Corps lit up the night sky over Holy Week.

The corps took part in a ‘Tenebrae on Maundy Thursday’, where members delved into the Scriptures of Christ’s death and resurrection, and on Good Friday invited people into prayer and meditation. Peter said each ‘station of the cross’ invited the person to enter a scene and ask what Jesus required of them.

“My wife Sarah included an image for each station for folk to look at while I shared the story,” he said. “A song would be sung or listened to after each station, which was then followed by a candle being extinguished.”

The ‘stations’ prepared the way for a day of celebration on Sunday as the corps looked to the year ahead. 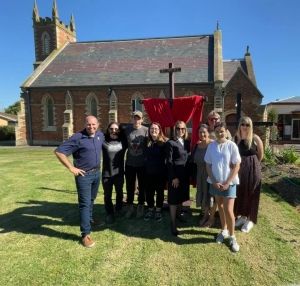 Bellarine Peninsula Salvos were honoured to be part of the ecumenical ‘Walk of Witness’, which ended at St James Anglican Church.

Young people across the state gathered for the first time in 18 months at the WA Divisional Youth Camp over the Easter weekend.

Uniting under the National Youth And Young Adults Spiritual Framework ‘Somewhere For Us,' they literally met around the cross on Friday night.

"The main focus was the invite we all have to table and in community. [And we looked at] how we can invite people to the table," said Auxiliary-Lieutenant Steven Friend, Divisional Youth and Young Adults Secretary for WA and Mission Leader at Rivervale Salvos.

Guest teaching came from Pastor Tara Conradt, and Daniel Casey from the National Worship Arts Team led everyone in worship – which was topped off with copious amounts of pizza. And with full bellies and sore feet, youth journeyed home on Monday with a united sense of purpose. 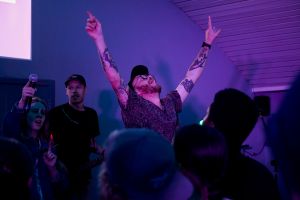 Territorial Leaders Commissioners Robert and Janine Donaldson took part in several services in Adelaide to commemorate Easter 2021, beginning with a special Passover meal at Gawler Corps on Maundy Thursday, which was attended by about 50 people.

They then attended and took part in the Good Friday morning service at North East Salvos, a recent merger between Campbelltown and Oakden corps, at Paradise Primary School. It was the first Easter weekend of celebration for the combined corps as COVID-19 restrictions meant no corporate gatherings were held last year.

The Donaldsons were part of the congregation at Parafield Gardens that night for another Good Friday service, led by Corps Officers Captains Colin and Kylie Palstra. 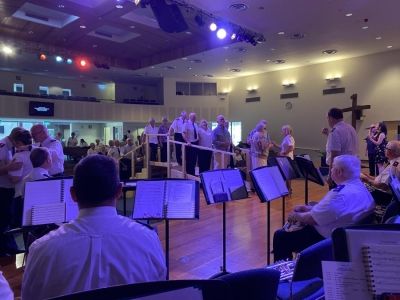 The congregation at Adelaide Congress Hall walk across a purpose-built bridge to signify moving from the old life into a new life with Christ.

The Adelaide Congress Hall dawn service, held at the lookout on Montefiore Hill overlooking the Adelaide CBD, was addressed by Janine, who focused on the experience of the group of women who discovered the empty tomb.

The Donaldsons then took part in the ‘Resurrection Sunday’ service at Adelaide Congress Hall where Robert spoke on ‘bridging the gap’, based on Romans 5.

A special timber bridge was built in the worship centre and Robert addressed the three parts of that bridge – the steps up to the centre, which was the journey of life before an encounter with Christ; the top of the arc of the bridge, where change happened when a person met Christ; and then the steps down the other side, which represented the journey of a changed life after an encounter with Christ.

At the end of the service, everyone in the congregation was invited to take the walk over the bridge – to ‘bridge the gap’ – and accept a small, timber cross from Robert and Janine in remembrance of and a commitment to their changed life with Jesus. 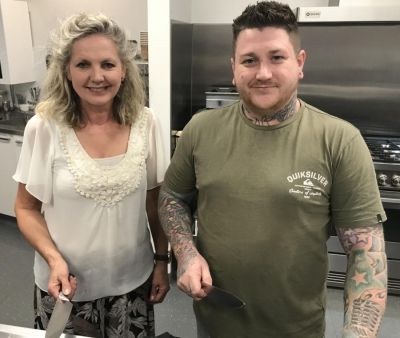 Cameron Brewis and Luelle Kreig cooked a full-size lamb for the Passover meal at Riverside Corps.

While many mission expressions around the Australia Territory share solemn Passover meals at Maundy Thursday services, few, if any, would serve up a full roasted lamb carcass. That was the case at Riverside Corps in Gawler on the northern outskirts of Adelaide, where Corps Officer Major Darren Cox led a well-researched and well-presented Jewish Haggadah meal, which was composed of a Seder (an order to the service and its emblems).

It was attended by Commissioners Robert and Janine Donaldson, and South Australia/Northern Territory Divisional Commanders Majors Lance and Anne Jeffrey. The 22kg beast was cooked on a spit over hot coals in the corps’ courtyard for six hours by corps administration assistant Cameron Brewis and volunteer and corps creative design coordinator Luelle Kreig.

Cameron said the animal was basted with olive oil and different herbs including thyme, rosemary and lemon garlic. The lamb, provided by Cameron’s butcher brother-in-law, was then carved up and served with chicken, flatbread and salad.

“I host a family night at my place every week and I’m always cooking up large pieces of meat on my smoker ... so when we were trying to work out how we were going to feed over 90 people for Passover, I thought: ‘let’s do a lamb on the spit’ ... never attempted it before but I think we pulled it off together as a team.”

Riverside Corps is one of few churches in Australia that holds a Good Friday service at 3pm – the time the Bible records that Jesus drew his last breath on the cross. 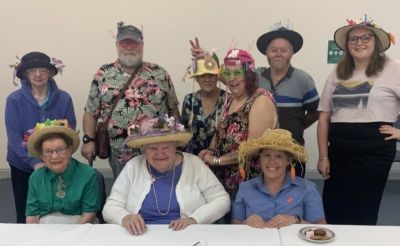 Members of Mt Barker Corps’ Coffee & Chatter group and the Easter bonnets they made.

In the Adelaide Hills, Mt Barker Corps marked the coming of the Easter weekend of celebration and commemoration with an Easter bonnet-making day.

Corps Officer Lieutenant Andrea Wayman said the event was part a new all-age Coffee & Chatter program that began this year in the corps and is run fortnightly on a Thursday.

For the Easter bonnet-making day – which is part of an age-old Christian tradition around Lent – each person brought a hat to decorate with “bits and pieces”. “Much reminiscing happened during the making of them,” Andrea said.

Corps Officer Lieutenant Daniel Wayman shared a devotion that focused on the story of Simon carrying the cross for Jesus. Andrea said there were many “lonely people searching for something to do during the week” in the Mt Barker community and Coffee & Chatter helped meet that need.

Corps Sergeant Major Carolyn Crowden coordinates the program, which includes a devotion segment and morning tea. “There is always lots of fun and laughter,” Andrea said. “This year, we have really focused on building relationships both new ones and strengthening ones that were already there. God is moving and breakthroughs are happening.” 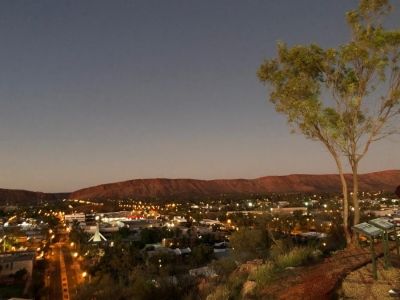 Alice Springs Corps had its first church service in 12 months on Maundy Thursday. Corps Officer Captain Rhonda Clutterbuck said that, because of that, the week had been “exciting for us”.

Rhonda said 120 meals were served on Thursday at The Waterhole – the centre attached to the corps where vulnerable members of the community can find safety, rest and revitalisation – which was followed by the “Spirit-led and filled” service.

“There was definitely a heightened sense of God’s presence,” Rhonda said. 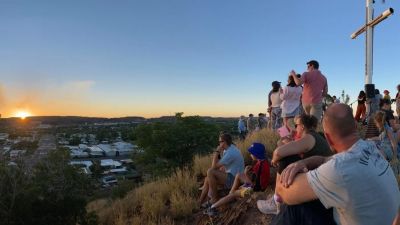 A crowd watches the sunset from the lookout in Mt Isa after the Good Friday ecumenical Easter service.

Mt Isa Corps, led by Captains Simon and Natalie Steele, took part in a combined churches service on Atherton St hill in the town – at sunset on Good Friday and again at sunrise on Easter Sunday.

Natalie said the services had been held for many years. This year, Simon and Natalie presented the scripture readings while the ICC church provided the music and the Baptist church congregation, the message.

She said that about 50 people attended the services. The services are held in two places – one under the cross on the hill overlooking the town and the other at the nearby lookout on the same hill.

The cross was lit up on Good Friday and remained illuminated across the weekend. 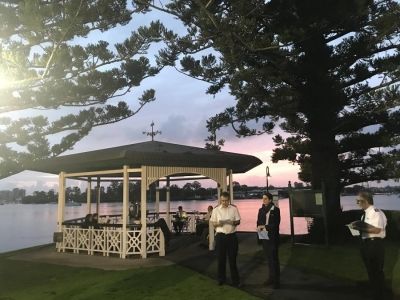 Dawn light shines on the Brisbane River where Stafford Corps was celebrating the risen Christ.

In Brisbane’s northern suburbs, Stafford Corps’ dawn service for many years has been held at Newstead Park, where Breakfast Creek flows into the Brisbane River.

Each year, as the sun rises, its rays shine up the river to where the group of worshippers gather at a rotunda to celebrate the risen Christ, bathing them in bright first light.

This year, the forecast was grim with a severe weather warning for the area but any inclement weather held off until the final blessing was prayed. “The first drops of rain began to fall virtually the moment we finished,” Corps Officer Major Ian Channell said.

Only an ensemble from the larger corps band took part to adhere to COVID-19 social-distancing requirements as the group usually sits in the rotunda. Ian spoke about recognising Jesus: “Often we don't recognise or see Jesus because we are not looking for him.”