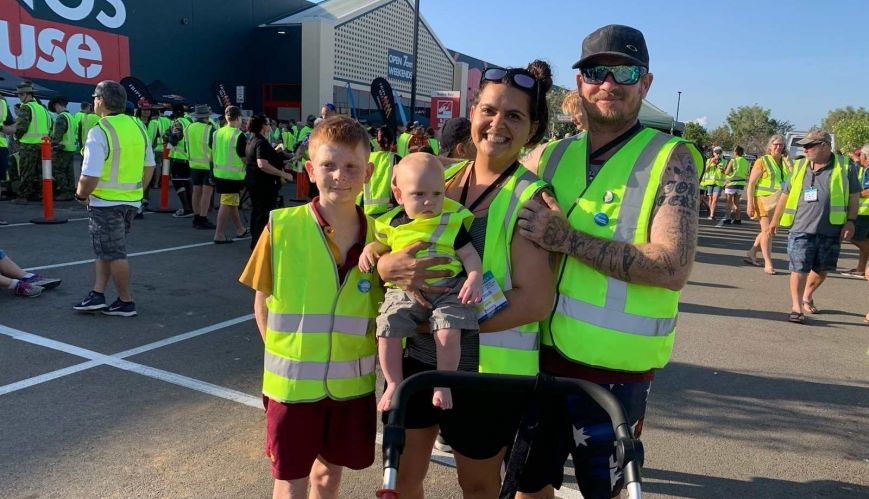 The Salvation Army assisted Tamara and her family after the Townsville floods of 2019.

Despite being eight months pregnant, State Emergency Services volunteer Tamara was frustrated that she couldn’t physically help others when the Townsville floods hit in early 2019.

At first, the bad weather seemed a bit of an adventure for Tamara and her family. Her tradesman partner couldn’t work in the rain, and their son was off school because of the flooding threat.

Tamara says she was preoccupied with the baby’s impending arrival; yet, she was also thinking of others who were suffering in flood-affected areas of the city and wanted to help.

“I was going through my [late pregnancy] nesting stage in one of the rooms,” she says, “So, I had everything set up for our baby Tyson, who was due in a month or so. Everything was ready in the nursery. We had his cot, clothes, dresser, mattress, rocking chair. It was February, so we also still had our new Christmas gifts and gift cards in the house.”

It was only when the deluge continued that Tamara began to worry about their own situation, especially when the water started to rise in the yard of their old Queenslander-style rental home.

“We moved the washing machine and fridge as high as we could and everything we had stored downstairs – up,” Tamara says, but there was no sense of panic until the warning texts from emergency services began.

“On Sunday morning, we lost power. Then we heard the loudspeaker from the army and police. At this point, you had to wade into the bottom of the house. It was waist-height.

“It went from worry to real fear. When I looked down the road and saw the army and the police and people walking out with their animals in baskets, bags on their heads and looks of disbelief on their faces. It felt surreal. Nobody thought it was going to happen.”

The family began packing, put the dog in the car and went to stay with Tamara’s brother.

That night, authorities released water from the nearby dam and Tamara’s house was inundated, not only with floodwater but debris and even overflowing sewerage. By the time anyone was allowed back in, the house and all their belongings were either destroyed or covered in mould. Tamara was not allowed to go back for health reasons, so family and friends salvaged what little they could.

Reaching out to the Salvos

After a few nights in a motel, paid for by Tamara’s workplace, the family was given priority by their real estate agent to move into a new rental. Unfortunately, they had no furniture, and so Tamara sat in the empty house waiting to see what few belongings could be retrieved.

She says, “When everyone came back, I asked ‘How is it?’ And my friends just looked at me, and their eyes said it all. I think about a week later I just wanted to do a drive-by, and at that point they still hadn’t done the collection. So, I saw everything outside the house. It was gut-wrenching. People say, ‘It’s only things, and things can be replaced’, but some of those things had real meaning for us.”

Given a couple of mattresses by friends, the couple visited the local Salvos Stores to see if they could buy bed frames. While the Salvos did not have frames to fit, they gave Tamara the number for Doorways [emergency relief] regional manager Andy King. Andy referred them to the Doorways case worker in Townsville, Robyn.

Tamara says: “From there, everything just turned around and went full-throttle forward. Robyn helped [through Doorways], and within a day or two, they were able to source through Salvos partnering with GIVIT [a national online charity], a new king-size bed frame, a bed for my partner’s son, gift cards to get some of our own linen and Robyn assisted with some other donated household items being distributed by the Salvos.

“Andy and Robyn were really emotionally supportive too. It is beyond appreciated and overwhelming to know there were people willing to help us that didn’t even know us. To say that we are thankful would be such an understatement.

“When Tyson was born, we called Robyn and Andy and let them know, and they both popped around to meet him, and they both came in with big baskets of extra things we might need.

“We are proud people. I am with the SES and not only couldn’t help during that time, which was so hard for me, but I had to accept help.

“We were sitting at dinner one night, and my partner was so moved that he said, ‘These people don’t even know us, and they are helping so much. I never knew there was so much good in the world’.”

NAOMI SINGLEHURST IS A CONTENT SPECIALIST – MISSION IN THE SALVATION ARMY BRAND AND MARKETING DEPARTMENT.