More than 110 people ‘attended’ the online event [due to COVID-19 restrictions] at the Hotel Fairmont to hear about the Army’s work in the city, participate in a silent auction and watch Orna create a number of arrangements in a 30-minute workshop.

Jennifer Byrd, Divisional Director of Communications, said it was the second year the gala had gone online due to pandemic restrictions but had still raised about $A280,000: “We pre-filmed the show and then live-streamed for people to sign in [and watch],” Jennifer said. “When the event is in person, we have a luncheon catered by the hotel. The event has grown to 240 attendees.”

She said the original idea for auction and gala came when the Army discussed doing “something creative” to help children from struggling families prepare for the new school year. It now supports the back-to-school initiatives and after-school programs at the Army’s Tenderloin Kroc Center and historic Chinatown Corps.

“The recent and ongoing pandemic has left many in our community in vulnerable situations. The funds raised from this year’s Flower Power event will go to benefit San Francisco families served by The Salvation Army but also with an emphasis on children in education,” Jennifer said. 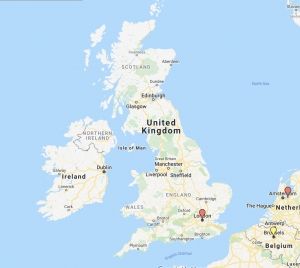 A map showing the area covering the newly named United Kingdom and Ireland Territory, which is part of The Salvation Army Europe Territory.

For the past 30 years, one of The Salvation Army Europe Zone territories has been known as the United Kingdom Territory with the Republic of Ireland.

Territorial Chief Secretary Colonel Paul Main said the name had sometimes given the impression that the Army’s work in Ireland was “an afterthought rather than an integral part of the territory”. With that in mind, the Army has moved to rename the territory, so, from 1 September 2021, it is to be known as the United Kingdom and Ireland Territory.

Emergency Disaster Service Teams prepare food packs as part of The Salvation Army’s support for victims of the Dixie wildfire in northern California.

Salvation Army Emergency Disaster Services teams are on the frontline of three wildfires in northern California – in Dixie, Caldor and Monument – serving hundreds of meals a day to evacuees sheltering in assistance centres. The Dixie Fire is believed to be the second-biggest recorded in the state, burning across more than 200,000ha.

John Berglund, Emergency Disaster Services Director for the USA Western Territory, said while the Dixie Fire had affected mostly federal or state land and forests, there had been “significant destruction” in several smaller rural communities in the area north of Sacramento.

The Army has no permanent presence in that part of the state, but John said a volunteer-run “service extension unit” provides three meals a day to first responders and people who fled their homes. 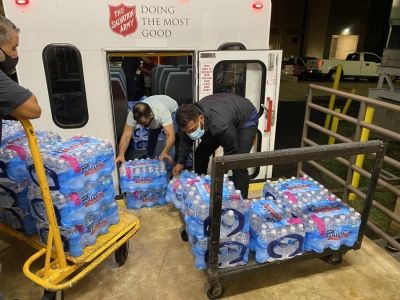 Fairfax Corps volunteers in Virginia unload hundreds of water bottles for evacuees flown into Washington after having fled civil unrest in Afghanistan.

When about 1000 evacuees fleeing civil unrest in Afghanistan were flown to Washington DC late on 20 August, Virginia Emergency Management officials called on The Salvation Army to provide them with food, water and hygiene items.

Fairfax Corps Officers Majors Donald and Jean Wilson and a team delivered more than 1600 bottles of water, 1245 snacks, 856 nappies and other food and hygiene items, including masks, to help the men, women and children who had fled their country with only the clothes they were wearing.

Donald said the evacuees were looked after in a local community college, set up as a processing centre and then moved to other more suitable accommodation. He said yesterday that, since the weekend, more evacuees had arrived, and more access restrictions had been put in place.

“We know these families are facing the difficult challenge of starting new lives in a new country far away from the place they knew as home. The neighbours of the Fairfax community have displayed compassion and generosity to these people who have gone through a horrible experience. Many churches are working together and supporting the Afghan evacuees in prayer,” Donald said.

Aid on the way in earthquake-hit Haiti

Property owned by The Salvation Army was damaged in the 7.2-magnitude earthquake in Haiti on 14 August.

The Salvation Army is to target some of the hardest-hit communities affected by a 7.2-magnitude earthquake that struck Haiti on 14 August as it seeks to take relief and supplies to more than 250 families.

While the Caribbean island nation experiences earthquake aftershocks, the Army is working to help more than 1000 people in nine areas initially with tarpaulins, blankets, drinking water and some basic food items such as rice, peas and cooking oil. They will also distribute hygiene kits including soap, nappies, sanitary items, toothbrushes and toothpaste, disinfectant and hand sanitiser.

Mondesir Henderson, from the Army’s assessment team in Haiti, said people in the city of Aquin, where almost all buildings were destroyed, were sleeping in the streets. “They make shelters with sheets and coconut straw. Some take refuge under trees, but the majority of the people sleep in the street.”

A tip: Donate after lockdown in NZ 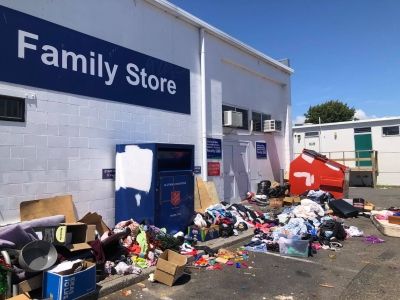 Salvation Army Family Store staff in New Zealand are unable to process donations piling up as a nationwide lockdown keep stores shut across the country.

It doesn’t happen often, but The Salvation Army in New Zealand is asking the public to stop dropping off donations to its Family Stores around the country ... for the moment. The Army said the stores were closed because of the level-four COVID-19 lockdown, so staff were unable to process donations.

Many people have been using the lockdown to do a clean-up at home. The Army is concerned the donations will get damaged in the weather, or that local councils will be required to remove the donations, which will likely end up at the tip or as landfill.

The Army said it valued the donations but there was “no value in donations that end up in the tip”.