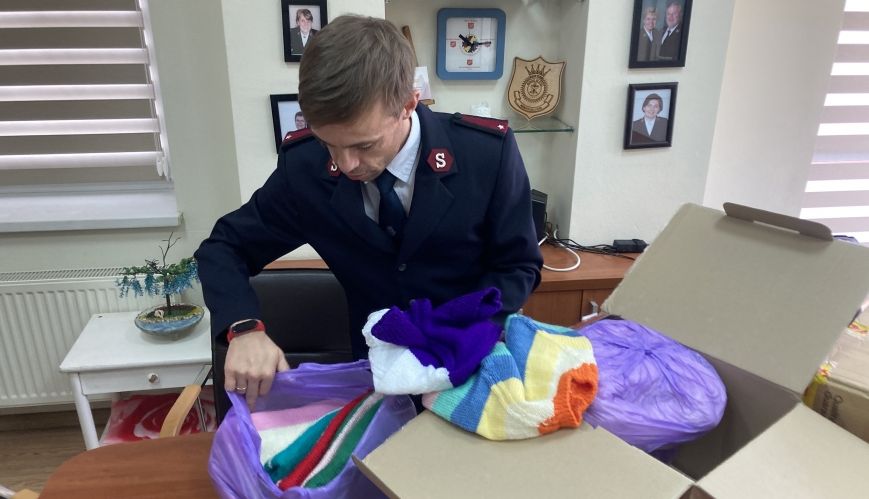 Lieutenant Evghenii Parfionov, Corps Officer at the Rainbow of Hope Corps in Chisinau, Moldova, opens one of the boxes of winter warmth sent from knitters in the Australia Territory.

Jumpers for children sent to the Eastern Europe Territory as part of the Australia Territory’s ‘Woollens for Moldova’ project already have found “happy little owners”.

“We are very grateful to receive these kind donations from your people, and the overwhelming response to your call touches our hearts,” Andrei said. “The socks, hats, gloves, and sweaters will find their new grateful owners at the northern region of Moldova. [But] it’s especially surprising for many people to hear that the woollens came from hot Australia – the land of deserts and kangaroos!”

Women from Warragul Corps (Vic.) started the Woollens for Moldova project two years ago. Support for the project has grown, so coordination has been taken on by Liz Cruickshank, the Army’s Territorial Secretary to the Property Trusts. Aged Care group gets on board

A group of keen needleworkers at Riverview Gardens Aged Care Centre in Ipswich, Queensland, has been creating items for the project.

The group, Knitters and Knatters, coordinated by retired Aux-Captain Ella Stegemann, meets each Tuesday to knit and chat over morning tea and produce jumpers, beanies and scarves.

Retired Major Annette West, who arranges the morning teas, said the group was relatively new and had focused on knitting items for Moldova. She said the group had already sent five parcels to Liz: "That is over 60 jumpers."

Fairhaven in the pink for a good cause 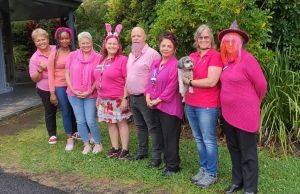 Frank Hassell, a case worker at Gold Coast Recovery Services Centre (Fairhaven), has put a great deal of effort into growing his fine beard. “I think it suits me and my motorbike, a Honda Fury Chopper,” he laughs. “But I told my wife that I wanted to do something to support Breast Cancer Awareness Month (October). So, I decided to step out of my comfort zone and dye my beard pink.”

He says clients and staff were surprised when he arrived at work sporting a pink beard, but that was just the start of the colour appearing around the centre. “I sent an email to our staff at Fairhaven to also go pink to support the cause,” Frank says. As you can see, his suggestion was enthusiastically received!

Online shopping helps planet and those in need

Salvos Stores average over 1000 new listings every day and have listed 185,000 items since May 2020. Since then, they have also delivered 92,000 orders to customers’ doorsteps across Australia – 54 tonnes of goods that have been re-homed instead of being sent to landfill. Further, 100 per cent of the profits raised through Salvos Stores go towards Salvos community work in the areas of homelessness, domestic and family violence, drug and alcohol addiction, poverty and financial hardship, youth work, natural disasters, and more.

“Get yourself a new outfit, something for around the house, or send a friend who is doing it tough a nice gift,” said Lucas Ferrier, Salvos Stores E-commerce manager. “Our wide range of items on the Salvos Stores website means there will be something for everyone.”

Three of the four key recommendations The Salvation Army made to the NSW Government regarding a Modern Slavery Amendment Bill introduced last month have been implemented. The Salvos National Policy and Advocacy team also proposed additional amendments required for the Act to effectively protect victims and survivors.

These recommendations help correct the flaws in the original 2018 Act and bring it into line with Commonwealth legislation. The Salvos also welcome the introduction of a one-year review of the Act. The reforms mean that victims of modern slavery in NSW will be entitled to:
• Approved counselling services.
• Financial assistance for immediate needs to secure the victim’s safety, health or well-being.
• Financial assistance for the economic loss suffered by the primary victim as a direct result of their enslavement.
• Recognition payments.​​​​​​​

For more information about the Salvos’ work on slavery and trafficking, click here.

Members of the congregation were invited to place a stone inside a wire cross as part of Bundaberg Corps 135th anniversary celebrations. The cross was then placed in the corps front garden as a memorial of God’s faithfulness.

A wire cross filled with stones became the centrepiece of a celebration weekend last month to mark the 135th anniversary of the Bundaberg Corps.

During the Sunday morning service, the congregation was invited to place a stone inside the cross to signify their continued support and involvement in the corps and its work in the community of Queensland’s Wide Bay Area. After the weekend, the cross was erected in the front garden of the corps facility.

Majors Gavin and Wendy Watts, Queensland Divisional Leaders, travelled from Brisbane to celebrate with the corps. Wendy has family connections with the city as her grandfather was converted at the corps after being invited to attend a meeting by a bandsman at an open-air service. Gavin, in his Sunday morning message, used the theme of stones being used as a memorial when he spoke around the story of Joshua and the Israelites having stacked 12 stones on the edge of the Jordan River as a memorial to the miraculous stopping of the river as they crossed into Gilgal. Six people were enrolled as adherents during the service.

The Queensland Divisional Fellowship Band was the guest music group for the weekend and combined with the Bundaberg Corps band on the Saturday afternoon to present a concert before a well-attended dinner. Corps officer Major Chris Mallard said celebrating such “a fantastic milestone” helped the corps see the faithfulness of God and an opportunity to “look to the future to see God at work”. “If we stay in the past, we will miss being a part of all God is doing,” he said. 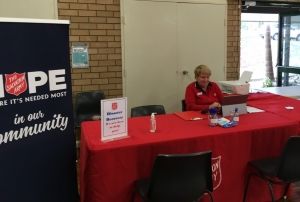 The Salvation Army’s NSW Strategic and Emergency Disaster Management (SEDM) team has been busy helping people recover from a hailstorm on the Mid North Coast earlier this month.

The State Emergency Service reported that it received about 1000 calls for assistance during the storm, which hit the Coffs Harbour region. Kim Lee, from SEDM, said about 400 homes were damaged, with 26 rendered uninhabitable.

SEDM initially worked with the Coffs Harbour City Council (CHCC) to provide coordinated assistance and support, especially among the vulnerable in the community, and  then involved at a regional recovery centre – run by the Department of Communities and Justice and CHCC – set up to provide support to those still needing assistance.

The Army committed some of its Woolworths STAND (Support Through Australian Natural Disasters) funding to help in the relief effort. Woolworths puts aside money from selling its STAND bottled water, distributing it among four community organisations, including The Salvation Army.

In Armidale, the Army continues to work with the Armidale Regional Council to provide remote support to people affected by a late-night storm that struck the NSW Northern Tablelands town recently. The SES reported it received more than 120 calls for help as the storm went through the town, overturning cars and blowing roofs from houses. About 5000 people were evacuated, and 11 homes were destroyed.