HopgoodGanim Lawyers Managing Partner, Bruce Humphrys, gives Shieldy and The Salvation Army's community and social work a shot in the arm with a $35,000 cheque from its COVID-19 staff vaccination initiative. Helping to hold the novelty cheque is Russell Vincent, the firm's General Manager Finance Operations.

Injection of funds from vaccine initiative

Brisbane legal firm, HopgoodGanim Lawyers, has presented The Salvation Army with a cheque for $35,000 as part of a COVID-19 initiative run over the past several months.

Managing Partner, Bruce Humphrys, said the firm, a long-time supporter of the Salvos in Queensland, had committed to donating $5000 for every 25 staff members who had become double-vaccinated with the COVID-19 vaccine.

Bruce said the firm was "incredibly proud" of its partnership with the Salvos over more than 10 years, having supported the work they were involved in within the community, particularly over the past two years of the COVID-19 pandemic – much of which went unreported.

Derek told those gathered that the money donated by businesses such as HopgoodGanim would be used in the fight against the rising rates of homelessness and domestic violence, particularly among women, which had become "an alarming trend" during the pandemic. 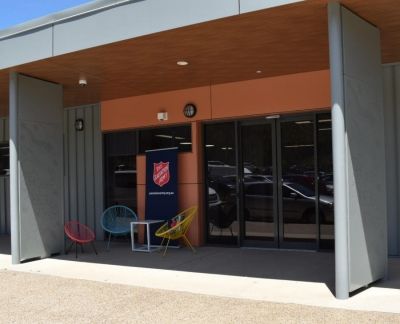 The entrance to the newly opened Philip Street Precinct community and family facility in Gladstone.

The Philip Street Precinct, a multimillion-dollar community and family project in the North Queensland mining town of Gladstone, was officially opened last weekend.

The official opening was held on 12 November followed by a Community Fun Day on 13 November at the precinct, which included tours of the facility, a sausage sizzle and homemade snack stall, face painting and lawn games. Gladstone Corps Officer Captain Kaylene Ford ran a mainly music session for children.

Mayor Burnett said the stage opened at the weekend was "just the beginning" for the precinct with further plans for the site to provide facilities and services for other community sectors including aged care.

The project so far has been the realisation of a Gladstone Region Social Infrastructure Strategic Plan which recommended centralisation of community services close to an existing retail centre serviced by public transport.

The Salvos are to have a significant role in providing the services run out of the facility, adopting an holistic approach to helping the less fortunate in the community and improving the link between social services and the Gladstone Corps. Chris has been given the additional appointment of Precinct Manager.

Chris said he had closely liaised with the council during the initial planning discussions and throughout the development phase. Adelaide Congress Hall Corps is to be transformed this month into a life-size, interactive nativity scene for people to experience the Christmas story.

Corps Officer, Captain Sarah Healey, says there will be plenty of room at the inn for anyone wanting to take a journey back in time for its ‘Bethlehem Walk’, with characters from the story played by corps volunteers.

Sarah says it will be “a time of Christmas family fun” on Saturday 11 December, from 10am-1pm.

“We want to connect with our inner-city families and give them a memorable experience,” she says. “After such a rough year, we want to bring joy back into our city. Our mission statement as a church is to ‘love this city like Jesus does’, and there’s no better time to share and show this than when the world celebrates his birth.”

Sarah says visitors are to receive a bag of goodies containing “a handful of gold coins” and information about activities at the corps. The coins can be used to buy craft and other items from market stalls along a ‘Bethlehem street’. Shepherds will tell the Christmas story from their perspective, and ‘angel choirs’ will proclaim the message of Christmas in song.

On Saturday 5 December, the corps is to combine with Soul Factor Choir to present a Christmas concert in Rymill Park. 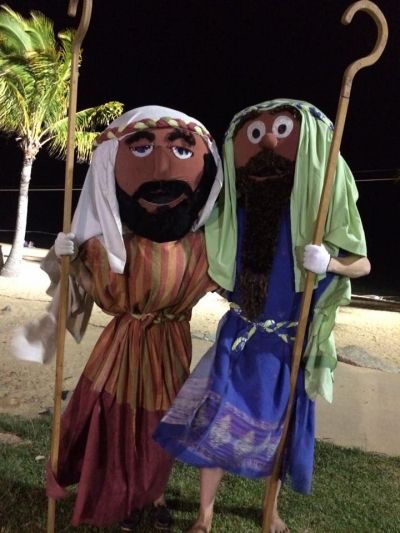 Some of the actors in costume as part of the signature North Queensland Christmas festival, Stable on the Strand.

After about 20 years, Townsville's outdoor ecumenical community program, Stable on the Strand, is to take on a new look this year in the way it tells the Christmas story.

In the most significant shift for the event, it is moving from The Strand on the Far North Queensland city's foreshore into the suburban Riverway recreational precinct after having not been held last year in its traditional location due to COVID-19 restrictions.

The Salvation Army Townsville Riverway Recovery Mission leadership team member, Captain Brad Whittle, said the Salvos had maintained a significant role in the presentation of Stable on the Strand for many years but the organisers had a new approach this year.

Stable on the Strand president Anne Harley said this year's event would be called Stable at Riverway, due to its new and larger location, which she described as being in a "key area for families in Townsville".

Anne said the new name followed another significant change in direction last year when Stable on the Streets was introduced because COVID-19 restictions prevented the traditional "interactive, walkthrough activity" going ahead.

She said people across the city last year were invited to express the Christmas story in their own way and submit their designs which were included on a map for people to follow – on foot, in private vehicles and buses.

It was such a success that Stable on the Streets is to run again this year in conjunction with Stable on Riverway.

An estimated 40,000 people traditionally visited Stable on the Strand.

Brad said the Salvos would man what he termed a "pickup precinct" in a Riverway park which involved providing a barbecue meal for each night of the program for people catching transport to and from the Stable on Riverway hub.

He said Stable on the Strand began 20 years ago as a Christmas display in the grounds of a Uniting Church in the city but it soon outgrew that site.

With the support of several churches in Townsville, the display was moved to Strand Park, where it became known as Stable on the Strand and has been run as an annual ecumenical event since then.

The park is set up as "a mini city of Bethlehem" complete with villagers and businesspeople. Volunteers from about 60 churches are involved in many roles from actors, to musicians and ushers, caretakers and even groundskeepers, as the automatic sprinkler system to the park is turned off but the site still needs to be watered.

Anne said Stable on Riverway would run for five nights from December 18.