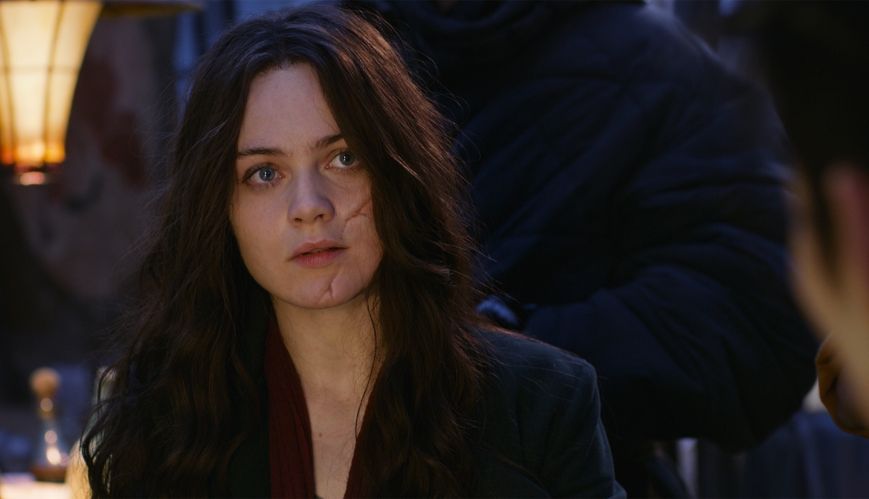 Heroine Hester (played by Hera Hilmar) is driven by revenge in Mortal Engines.

Set about 1000 years from now, Mortal Engines depicts our world being a post-apocalyptic wasteland populated by warring cities on wheels. Yep, our tech-mad, war-happy planet is going to destroy itself - and then evolve to where mobile cities devour each other. Entire cities. Hunting each other. As scarred heroine Hester (Hera Hilmar) tries to kill the unashamedly dastardly Valentine (Hugo Weaving), the threat of domination looms thanks to an ancient weapon being rediscovered.

Imagination is at a premium throughout Mortal Engines. Based on a book adapted by Jackson and his Lord of the Rings co-writers (including Jackson’s wife Fran Walsh), Mortal Engines breathes screen life into the vast idea of cities on wheels. Using a retro visual style called “steam punk”, the design and computer-generated effects produce a visual result which is huge and intricate. With the main city being London, the combination of landmarks and outlandish fixtures create memorable movie moments. There’s also a robot character called Shrike who is similar to a Terminator and manages to steal the show, thanks to his engaging sub-plot.

Despite who is behind this fantasy blockbuster, it’s a lumbering hulk of a dystopian epic. Instead of the heart, passion and wonder of Jackson’s Middle-Earth legends, Mortal Engines is mechanical and by the numbers. The visual strength of the movie cannot disguise how the story cogs - past wrongs, parental issues, young love, resistance to power and retaliation - have the freshness of a production line. Plus, the “cities on wheels” premise is swiftly sidelined in favour of focus upon Hester and her revenge quest. Sadly, her “saga” plays out exactly as you think it will (complete with corny lines) and it’s only the inclusion of wounded robot Shrike who injects a beating heart. So you know the human characters are struggling to connect and go beyond predictable when the lethal cyborg is the most human, interesting and sympathetic.

Mortal Engines does offer an insightful prediction of how humanity’s greed and selfishness are like a self-destruct button. There are some early nods to the fact people seem to love to create amazing stuff that, eventually, will end up being wielded against each other. But such a clear observation of human nature isn’t supported by a bold or inventive solution. No significant hope is presented among the wreckage of war and technology as we head to a conclusion that again depends upon some people choosing to do the right thing. While the familiar ending left me cold and uninterested, I did like how it subtly hints at a powerful truth we all should face. Mortal Engines manages to suggest that looking to ourselves for salvation is beyond our creative capacity. We can’t even concoct a way of saving ourselves from ourselves that is outlandish yet plausible. Cities on wheels is an idea so gobsmacking it’s hard to forget. Bit like how God sent his own son to earth to rescue us from the wrong we do against God – by exchanging his son’s life for ours. Talk about outlandish … yet more than plausible, because it actually happened. Jesus really came to earth, lived, died and rose again. And the hope that points to is beyond the wildest imaginings served up by Mortal Engines (or anyone else).