You are here: Home › Reviews › Book Review It S Time To Act By By The Christians In Extinction Rebellion

Book Review: Time to Act by by Christian Climate Action Book Review: Time to Act by by Christian Climate Action

Time To Act resources the Church to act on Climate Change. “Whether the Church will take responsibility for this cause remains the question,” says reviewer Anthony Castle.

The Church has been historically defined by those causes for which it chooses to have responsibility. 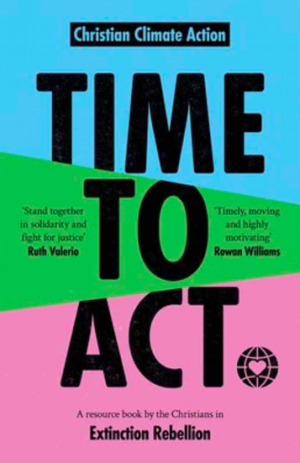 There have been moments where a minority of believers has decided to act – for example, the abolition of slavery, the emancipation of women, and the development of social welfare. Each of these instances of meaningful action represents clear Christian responsibilities for us today but remained minority causes for the faithful at the time and represented significant theological shifts for the institutional Church.

The Church is at such a moment right now, with the defining challenge of this century set to be the disruption and suffering caused by a warming climate.

Time to Act is a resource book for Christians and churches that demonstrates what it looks like to act at this moment. Edited by writer and campaigner Jeremy Williams, the book is a resource for faith-based engagement. It includes hymns, sermons and prayers gathered from Christians participating in the Extinction Rebellion (which, according to its website, is “a decentralised, international and politically non-partisan movement using non-violent direct action and civil disobedience to persuade governments to act justly on the Climate and Ecological Emergency”).

The Christian Climate Action community draws on the Church’s non-violent resistance and social justice traditions, marrying prayer and liturgy to protest and disrupt while arguing both the moral and theological motivations for involvement.

No matter what Christians may or may not believe, we can’t deny the facts. The oceans have been warming, acidifying and rising since the 1950s. Global temperatures have risen one degree over the past century, and current global carbon emissions have the climate on track for a rise of at least two degrees by 2100. The suffering faced by our children and grandchildren – the neighbours we’re commanded to love – will be real.

Climate change isn’t coming; it’s here. This is the moment. Whether the Church will take responsibility for this cause remains the question. Time to Act shows us how to answer it.

Time To Act is available now at Koorong and online.

Anthony Castle writes for The Salvation Army and elsewhere.