Soseh Cowham is an adherent and volunteer at Coffs Harbour Salvation Army.

Over the course of the Black Summer bushfires, Soseh Cowham had to evacuate her home on the NSW Mid North Coast numerous times.

In fact, she says she has been left ‘homeless’ through both bushfires and flooding over the past few months, but this hasn’t deterred her from her mission to share the love of Jesus with her community.

Soseh’s experience with the full force of nature has inspired her to step up her volunteering to assist people affected by a disaster.

“I am an adherent at The Salvation Army in Coffs Harbour,” she says. “I was at another church when I started attending [The Salvation Army’s] Worship on Wednesdays (WOW) service and volunteering to cook the meal.”

The hands-on experience of serving at The Salvation Army was what made Soseh feel so ‘at home’ at the corps.

As well as volunteering at WOW, Soseh runs Bible studies at Adele House, a recovery services centre with strong connections to Coffs Harbour Salvos, and assists with the corps’ weekly Doorways program that offers emergency relief and financial counselling to locals in need.

When the Black Summer bushfires hit the area in November 2019, her own home at Nana Glen, north-west of Coffs Harbour, came under threat.

“The fires were literally metres away from my home,” she says. “The firefighters came and said I needed to evacuate. There are two houses on the property – mine [the granny flat] and then the main house [the landlord’s]. So, I took my anointing oil and went all around the area and anointed it and left it in God’s hands.” 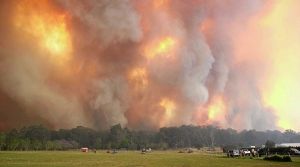 Soseh wasn’t able to get back to her home for about a week. During that time, she heard that her property was right in the middle of where the bushfire had come through. She had left her home with only her passport and a few items of clothing. She slept in her car on the first night, then went to the corps and had a shower. “I said to myself, ‘If it’s meant to go [burn down], it will go.’”

But both her granny flat and the main home on the property remained standing, despite the home next door suffering severe damage. “The back part of their house completely melted,” says Soseh. “Nothing happened to ours.”

She adds it to her list of miracles. “What God has done for the people of Israel at that time, it hasn’t changed ... I am very blessed, I am blessed in every aspect,” she says. “The fact that I wake up knowing that I am saved by God’s grace is a blessing in itself.”

Despite being temporarily homeless, Soseh stepped straight into action serving others, volunteering her time with Coffs Harbour Corps to deliver bushfire relief. She hit the phones, attempting to contact every single person affected in the Nana Glen area.

“I spent hours chatting with them,” she says. “They had lost so much, and they just wanted someone to talk to, someone to hear them and listen to them, especially in those early days when it was so fresh.”

Soseh was able to offer immediate financial assistance and set up a database of affected residents so that she could keep in touch. Soon after starting, she was asked to cover the townships south of Coffs Harbour that had also been hit hard by the bushfires. “I got to meet a lot of wonderful people in the community,” she says. “They have gone through a lot.”

A few months after the fires, Soseh was conducting a Bible study with participants of the Adele House drug and alcohol recovery services centre. It had been raining heavily all day and by the time she left that evening, flooding had hit, and she was unable to get home. For the second time in the space of a few months, she found herself temporarily homeless.

“It was a terrible night,” she says. The experience left her feeling even more connected with those impacted by natural disaster.

The Salvation Army has now appointed a bushfire relief worker to the Coffs Harbour area, but Soseh still maintains contact with the people she supported during their unprecedented time of need. She continues to volunteer with The Salvation Army and at Adele House, because she says she is passionate about being ‘God’s light in her community’.

“We need to be so different to everyone else,” she says, “for them to want to follow Christ and come into his Kingdom. Church people need to know that [Christianity] is not just about going to church each Sunday and that’s it!

“I’m not a hero, I’m just a person who follows Jesus ... a vessel that God can use in order to do his work on earth.”