Campers and leaders gather on an obstacle course at Proserpine’s Camp Kanga on the final day of the inaugural Equip Northern youth camp in Far North Queensland. 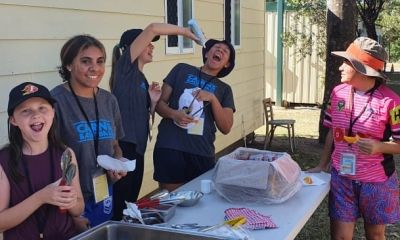 About 50 young people from as far afield as Mt Isa, Cairns, and Bundaberg attended the Queensland Division’s first Equip camp for youth in the state’s Central/Far North region. Held over six days at Camp Kanga in Proserpine, ‘Equip Northern’ ended up being the only youth camp the Army could run across Australia due to COVID-19 restrictions and lockdowns.

“The camp was a massive success with God moments and experiences everywhere,” said Auxiliary-Lieutenant David Dobbie, the Queensland Youth and Young Adults Secretary. “The whole week blessed by God.”

Workshops covered worship leading and music, audiovisual ministry, and creative prayer. Other sessions were entitled ‘What the Salvos ...!’ (where “lots of questions” on the Army were answered), ‘Bible and Beyond’, ‘Use your Words’ and “improv comedy”.

Another popular workshop was ‘Hospitality’, hosted by a team from Fassifern Corps (South-East Queensland), who travelled to Proserpine to give campers some basic hospitality and food preparation skills – all done from a Salvation Army Emergency Services (SAES) catering truck loaned from Townsville.

Having the SAES truck on-site allowed campers to experience “other ways of serving”, David said. “Obviously, up in this part of the world, something happens probably every year [that the SAES is called to], so we were trying to equip the young kids to know what ministry can look like and the possibilities.”

The camp theme was ‘Somewhere for Us’, which David said was part of the Army’s national focus for the year where “the youth of our country know that there is a place with them at the table. It doesn’t matter who you are or where you come from, Jesus prepares a place for you.”

Major Gavin Watts, Queensland Divisional Commander, flew in on the Saturday afternoon of the camp to participate in the remaining activities of that day and be involved in the worship service on Sunday morning. Malinda Schultz, who manages the Hamilton Thrift Store, discovered these World War One medals belonging to Norman Annett while sorting through donations.

Salvation Army thrift store volunteers regularly come across unusual donations, but a discovery at the Hamilton store in Victoria took everyone by surprise. Store manager Malinda Schultz was sorting through some donations when she found several World War One medals hidden inside a book. With a bit of detective work, thanks to a serial number on the medals, she eventually found a name.

“We were able to find out his name was Norman Annett, and he was born in Warracknabeal, and that he had a brother, William, and a sister, Evelyn,” said Malinda. After some further investigation (with a bit of help from Facebook!) Malinda discovered that both Norman’s siblings and his mother were buried in the local Hamilton cemetery. Unfortunately, Malinda was not able to locate any living descendants.

Unable to pass the medals onto any family, the thrift store readily donated them to the Hamilton RSL. “It’s been a fantastic response from the community, and without some of their leads, we wouldn’t have [worked it out],” said Malinda. Tables in the shape of a cross formed the centrepiece of the Top End Area Leadership Team Retreat Day.

Area Officer Captain Erica Jones said the Jeffreys joined other ALT members and representatives from various mission expressions in Darwin on the retreat beside Lake Alexander at East Point for a time of contemplation and reflection.

Erica said the retreat was to have been held to coincide with the launch of the Territorial Prayer Focus initiative, which ran from 22 August-12 September, and at the same time as their counterparts in South Australia, but a 72-hour lockdown in the Northern Territory capital forced it to be postponed. Captain Jeff Milkins accepts the Tasmania Mental Health Advocate of the Year Award on behalf of the team at Glenorchy Salvos.

Glenorchy City Corps in Hobart has won the Mental Health Advocate of the Year Award for Tasmania. “This award is in recognition of the work our entire team does,” Corps Officer Captain Jeff Milkins emphasised. “I am the public face of the team. My wife, Jacqui, our Doorways [emergency relief and case management] team and church team all do some amazing work, and I accepted the award on their behalf.”

The team at Glenorchy City Corps has worked hard in Hobart’s north to build relationships with people experiencing homelessness, those struggling with substance misuse and others who need assistance. As well as Doorways, they also offer laundry and shower facilities, community meals and a drop-in space. “We just want to keep serving in our community and caring for those who need caring for,” said Jeff. “This is our aim every single day.”

Gambling Harm Awareness Week is being held from 18-24 October this year, with the theme of Talk.Share.Support. The Salvation Army is taking the message nationally to encourage people to talk about the harms associated with gambling and their effects on communities, families, friends, workplaces, and individuals.

As part of the week, a free webinar, ‘Behind Gambling Harm – comorbidity and neuroscience’, will be held on Tuesday 19 October from noon-1pm.

Guest speakers will be Prof. Dan Lubman, addiction medicine specialist and clinical director of Turning Point, highlighting the neuroscience behind gambling harm, and Sue Rosenhain, health promotion manager at Women’s Health in the North. A lived-experience speaker, Stuart, will offer his insights and Aria award-winning singer/songwriter Adrian Eagle will perform.

The webinar is being presented by Gambler’s Help City, a program of The Salvation Army. Register here 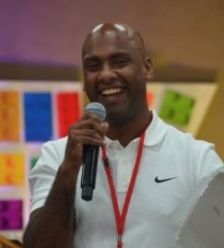 Adrian Kistan will be the keynote speaker.

Registrations are being taken for the third and final 2021 Tri Territorial virtual series webinar. The session, scheduled for Thursday 28 October at 5pm AEDT, will focus on intercultural mission.

The keynote speaker will be Adrian Kistan, the Army’s National General Manager, Mission Inclusion. Adrian will speak with firsthand knowledge on the importance of intercultural mission, having migrated to Australia from South Africa as a child with his family.​​​​​​​​​​​​​​

The interactive webinar will consist of a 40-minute keynote, followed by a Q&A time at the end. Register for the event here 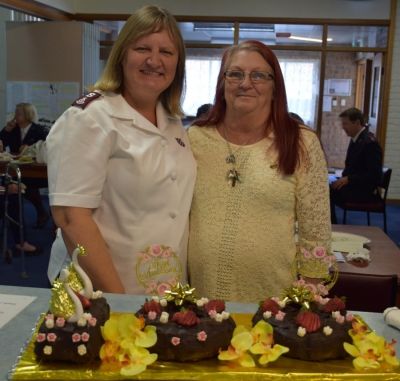 A tree-planting ceremony was one of the highlights of the 100th-anniversary celebrations at Murray Bridge Corps in South Australia last month. Mayor Brenton Lewis planted a council-chosen ornamental pistachio tree in front of the corps building as part of a weekend of events and services to mark the centenary.

Among other guests over the weekend were South Australia/Northern Territory Divisional Leaders Majors Lance and Anne Jeffrey and Area Officer Major Dean Clarke. Murray Bridge Corps Officer Captain Claire Watson said a Saturday afternoon event was held to thank God for his goodness over the years and to pray for healing and renewal.

Claire said about 50 people met for a worship service of celebration on Sunday morning, during which Brenton shared insights about the city, and Lance gave a message based on Isaiah 61. Karen Strauss was enrolled as an adherent and Theodore Freund as a junior soldier during the service. The celebration was followed by lunch at which a special cake made by Karen was served.