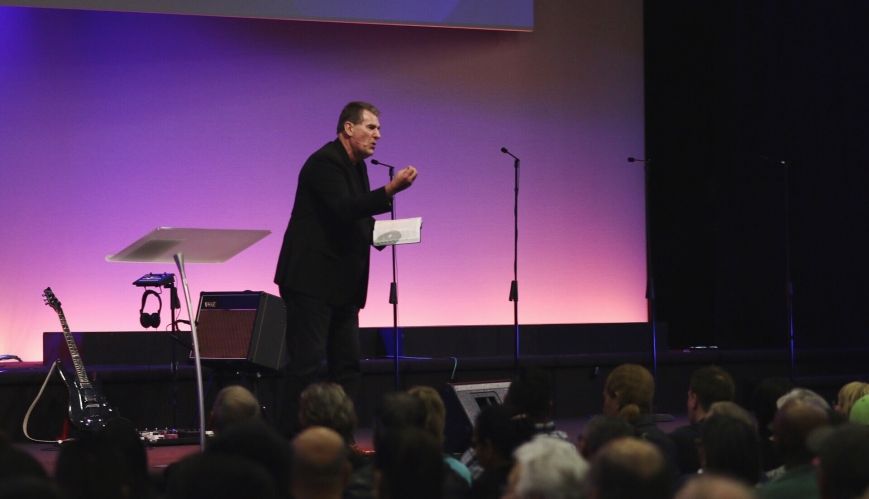 Allan Meyer is the guest speaker at this year's Just Men Conferences in September and October.

Special guest at this year’s Just Men Conferences, Allan Meyer is the author of the Careforce LifeKeys program. Along with wife Helen, the couple led Careforce Church Mt Evelyn in Melbourne’s east for 26 years until 2003. During that time they came to be passionately convinced that the good news of the gospel was not just about salvation but whole-of-life restoration. They now spend their time working solely on the LifeKeys programs, which have been embraced by thousands of churches of all denominations around the world. Allan spoke to Pipeline’s ANNE HALLIDAY about why men’s sexual integrity is a critical issue in our churches and our world.

Anne: Men’s sexual integrity has been a key part of your work over the past 10 years. What prompted your focus in this area?

Allan: Careforce Lifekeys grew out of an understanding of why things hold people back from restoration. I was constantly bumping into the extraordinary pressure that people live under. One of those areas of pressure is sex. It is one of the most powerful dynamics in a person’s life. You think when you are a teenager and in your early 20s and you feel the pressure of your own sex life, “oh well, I’ll just get a bit older and it will all settle down”. But then you see someone destroy their ministry in their 70s because of that pressure and you realise that you are going to have to deal with for the rest of your life. I knew I would build a lifekeys course out of my PhD project in the early 2000s and initially I intended to build something that related to sexual addiction. However, when I got into my research, I found out so much that I had never heard or been told which were such valuable insights, for men in particular. Sex is more problematic for men than for women. The biggest problem women have with sex, is men. Men have a significant challenge with sex and it’s why 96 per cent of all sex crimes are committed by men against women and children. So you have to focus on men if you want to see the community functioning better.

What is the most difficult barrier to Aussie men engaging with their own sexual integrity?

The biggest barrier is seeing the issue of sexuality integrity as being about shame rather than education. Rather than addressing issues of sexual integrity by calling men sinners and reprobates, the church needs to teach them the skills that will help them cope in a highly sexualised world. We need to help them understand why they are so pressured in this area. It’s about recognising that this is a very normal way that God has wired them and by understanding the issues and putting some steps in place, they can be decent men and honourable men, and women and children can be safe in their circle of influence. From the first time we did the pilot Valiant Man project, it was stunning how quickly those men engaged and opened their hearts and talked like they have been talking about these issues all their life. Right from the start, it was not just something they needed but that they embraced.

Are the factors that impact male sexual integrity the same for every generation or are there factors in this generation that have increased pressure on men?

There’s no question that men are much more impacted sexually by sight than women are; they are living with libido as their primary hormonal orientation, which means that environment matters a lot for men. You put men in a highly moral environment, where the role models and conversations are positive, that elevates women and encourages healthy behaviour, then it’s not so hard for men to deal with those pressures. But you put them in a highly sexualised environment, where women are used to get men’s attention and it’s a different matter. In our world, from advertising to pornography, the use of women to get men’s attention is normalised and that raises the temperature for men.

Some Christians would say that you just need the healing work of the Holy Spirit. What do you believe that the scientific disciplines of biology, psychology and neurological science have to contribute to the healing of inner wounds?

Jesus adopted Isaiah 61:1-2 to explain his ministry. It is a fascinating insight into the reality that God is interested in much more than salvation for humankind. He is passionate for their restoration. This passage asserts that it begins with the Spirit. The best healing environment is a spiritfilled environment –but that’s not where it stops. The passage mentions preaching the good news to the poor. One of the reasons Jesus preached so much was because in restoration a person needs to understand that they are not just a spiritual being, but a spiritual being in which God has located their personality in a brain. The brain is the hardware of a soul. The way they process life as a spiritual being is through the cognitive realm. When humans get insight and connect the dots, when they understand, that’s when change becomes possible. The Greek word for repentance is metanoia, which means a change of mind. Repentance is a changing of the way you think. Isaiah goes on to talk about binding up the brokenhearted. Emotions go to the core of restoring relationships. You have to understand the role that emotions play in the way people hear and respond to others. Then there is the release of the captives – you have to understand the role that behaviour plays. All of scripture talks about people making choices and those choices have an impact on their spiritual health. Some Christians will say all you need is the Spirit, but I believe scripture reveals that there are more elements required for restoration than just the Spirit.

What do you wish every man could know or understand about themselves?

Firstly, at some point you have got to come to grips with the fact that you were created for God, by God. That you are not the product of a mindless, mechanistic universe. You are created by a Father and for a Father. Until you connect with him you will never come to grips with the things that you struggle with as a man. Secondly, you were made for heaven. You were made for an environment in which you aren’t currently living and, as a result, you are going to experience stress and you have to understand how you manage that. You have to live defensively for the sake of yourself and your family. Thirdly, your struggles are not unique.

The Just Men conferences this year will be held at The Collaroy Centre, on Sydney’s northern beaches, on 9-11 September, and at Mapleton, on Queensland’s Sunshine Coast, on 28-30 October. For more information, email just.men@aue.salvationarmy.org.au