You are here: Home › Features › The Refugees Advocate 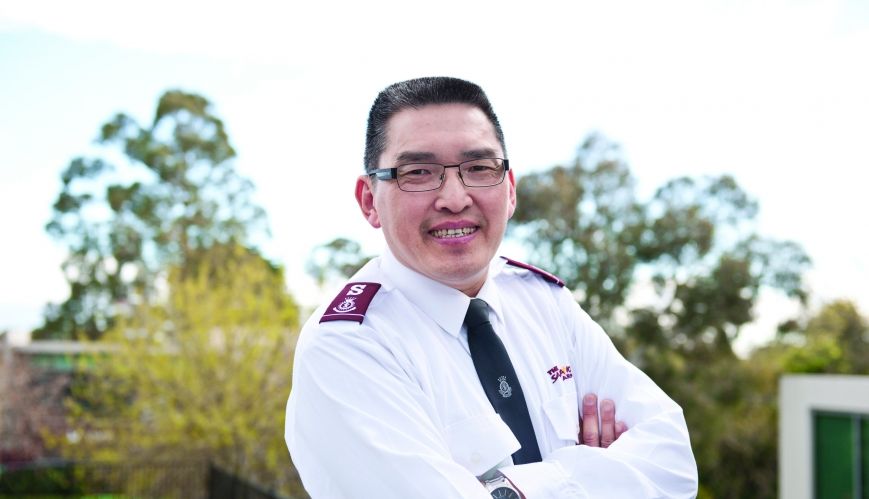 An hour or two in conversation with Samuel Pho puts life into perspective. Samuel is a refreshing character. He knows adversity firsthand as a refugee, but he loves to look on the bright side of life. He likes to tell stories and jokes – it’s how he learned English.

When he smiles – and he smiles often – he beams. Two hours in his company reminded me of servant leadership. Before, during and after our interview, he served my interest first. Samuel has a lot to teach us about attitude. Hopefully, his appointment this year as Canberra-based Salvation Army Australia National Secretary will expose us in the Eastern Territory to more about this man who says he owes his life to God.

Lieutenant-Colonel Samuel Pho is a Southern Territory graduate. His principal role is to liaise with government – political and administrative – other political parties, diplomatic staff and nongovernment agencies. He has been prepared for the role through duties in public relations, media relations, extensive engagement with multi-cultural communities and leadership of The Salvation Army Hong Kong and Macau Command, which included liaising with the local and Chinese governments. As well as his native language, he speaks Cantonese, Mandarin, French and, of course, English. He is currently studying for a Masters degree in Spiritual Direction.

The first 20 of his almost 60 years were mostly unpleasant. He was born Xuyen Tam Pho in 1957 in what was then known as Saigon, the capital of South Vietnam. He later adopted Samuel as his first name to make it easier for others to pronounce. At the time of his birth, Vietnam was ravaged by civil war between the south (backed by the United States and Australia) and the north (supported by the Soviet Union and China). Fierce fighting in the streets of Saigon was part of everyday life for the young Samuel.

He lived with his parents, three brothers and a sister. The family owned a Vespa scooter – their only transport. His father worked in insurance and later owned his own company. His mother was a school teacher. They lived comfortably, albeit never sure when tragedy might strike.

Religion was not a serious part of family life, especially in Samuel’s early years. He and his siblings were sent to Sunday school as a “free babysitting” service to give their parents some free time. In his teenage years, Samuel was attracted to the Christian message. At 17, he was baptised. He already had a Christian commitment, but he saw his baptism as “the boy coming of age spiritually”. It was the year that Saigon fell to the Communist north and was renamed Ho Chi Minh City in honour of the North Vietnamese Communist Party leader. Life for Saigon locals got even worse.

“I still remember the feeling of hopelessness,” Samuel says. “It was like an iron curtain coming down on us. We lost all contact with the rest of the world. We had no hope. We had been brainwashed, of course, in the south that everything about the Communists was bad. Well, the Communists proved what we had been told once they took over. 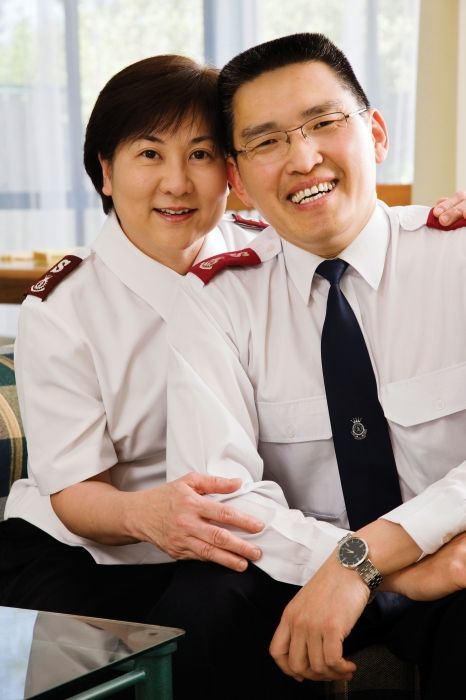 Samuel met his wife Donni in Melbourne and they have been married for 31 years.

“There was no freedom. We had to get official approval every time we wanted to congregate. So, if you wanted to hold a church service, you had to get permission. Dad had a birthday party at home with family and friends. Police circled our house. They thought we were having a secret meeting. They took him to the police station for interrogation. You even had to have permission if somebody was going to stay at your home overnight. We were constantly being watched. We lived in fear.”

Food was rationed. Residents were provided with coupons to acquire food. People disappeared during the night. “The government said it was rebuilding the country. In the middle of the night, there would be a knock on the door and somebody would be taken away. The rest of the family wouldn’t be told where their family member was taken.”

Samuel decided he wanted to escape Vietnam for a better life elsewhere. His escape was organised by his father. He was aware that it could mean he would never see his parents and siblings again. He was sent to a rural area with a port.

After three days, he was advised the boat would be sailing under the cover of darkness that night. He was excited, but afraid. The port was being closely watched for such activity. It was his 21st birthday. He and a friend who was going with him decided to have a “last supper” meal at a restaurant – just in case!

About 180 people were on board the boat built for a few dozen. There was little food or fresh water. Five days later, they arrived in Malaysia. “When I saw Malaysia, I cried; I cried like a baby. I had never been away from my parents before. I was scared; scared that I may never see them again. I took only a few essential documents with me. I don’t even have any photos of me when I was young to show my own children now.”

He was sent with other refugees to a Malaysian island and given official refugee status by the United Nations. On the island, he met three young people from his church back home. “God was looking after me,” he says. Living conditions on the island were primitive. He shared a bamboo hut. There were no toilets. He applied for permission to travel to Australia as a refugee. He was approved for travel to Brisbane, but missed a flight due to a health issue and was sent later to Melbourne, instead.

Don’t be afraid of refugees, Samuel says to Australians today. “It wasn’t easy to leave my country and my family. When you leave, you leave everything behind. There is no guarantee of safety; not even a guarantee of food or even a future.

“When we came, it was the same as today. We knew some people wouldn’t want us in their country. There was talk of this ‘yellow peril’. People looked down on us. But Australia took a risk accepting us. Now, we need to again take risks in accepting others. One of the reasons I am a Salvation Army officer today is a promise I made to God in Vietnam to serve him fulltime. It’s also my way of serving Australians in appreciation for accepting me.”

When he arrived in Melbourne, he was settled into a hostel at Williamstown. He had his own bed, food and advice on assimilating into Australia. Various church groups, including The Salvation Army, worked among the refugees at the hostel. “I spoke very little English, but I was able to tell the church people that I was a churchgoer.

“One Sunday morning, a man from a church collected me and took me to his church. When we arrived, I saw the minister smoking a cigarette. I didn’t like that. But that night, a Major from The Salvation Army picked me up at the hostel and took me to the Altona Corps. The first thing I saw was a Salvation Army crest. I didn’t know what it meant. But when I went inside the building, I saw a big sign that said: Smoking Strictly Prohibited. I said: ‘Hallelujah, this is the place for me’.”

He became a Salvation Army soldier at Altona Corps in 1979, and entered the officer training college two years later. Samuel met his wife Donni – who also has a story of hardship and escape from Vietnam – in Melbourne and they married in 1985. Raised in an orphanage and one of 11 children in her family, Donni arrived in Sydney via Malaysia in 1979 and attended Campsie Corps. After meeting Samuel in Melbourne, Donni also became a Salvation Army officer. They have four adult daughters –Miriam, Phoebe, Naomi and Hannah.

Samuel was able to reunite with his Vietnamese family. Eleven years after arriving in Australia, he succeeded in sponsoring his parents, a brother and sister to join him in Melbourne. All became Salvation Army soldiers. His parents have since been promoted to glory. Two other brothers live in the US. Samuel has seen them. “I am a very fortunate man,” he says. “God has been good to me.”