You are here: Home › Features › The Army In Miniature

The Army in miniature The Army in miniature

The Canadian Staff Band in 1914. “I based this on a photo taken right before the Empress of Ireland disaster,” says Norman Cuthbert.

To step into Norman Cuthbert’s house is to find yourself surrounded by The Salvation Army.

In one corner, General William and Catherine Booth are being transported to an open-air meeting in a horse-drawn carriage. Elsewhere, Salvation Army lassies are handing out hot coffee and donuts to a World War One trooper returning from the trenches.

Here, a Salvation Army band happily plays in front of a supermarket at Christmas. There, three female Salvation Army members sell copies of the War Cry. Nearby are Army bands from Africa and Canada, marching in step.

“I have more than 500 Salvation Army figurines, itself part of a larger collection of more than 5500,” says Cuthbert, a Salvationist in Canada, with pride. “It’s Salvation Army history you can hold in the palm of your hand.”

Cuthbert’s passion for miniatures started at a young age. The son of Salvation Army officer parents, Cuthbert and his family were originally stationed in Ontario, then served in New Brunswick and Nova Scotia. 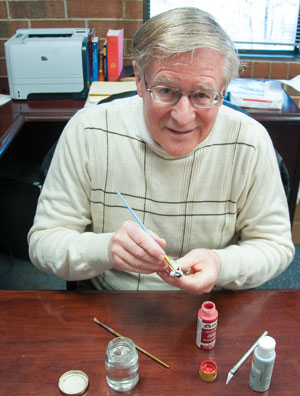 When he was a boy in Truro, Nova Scotia, Cuthbert’s Uncle Frank, who was a staff sergeant in the Canadian military, would regularly send him a box of toy soldiers on his birthday and at Christmas.

“I was fascinated and started to collect on my own,” Cuthbert says. “When Dad would give me my 25 cents allowance, I would run down to the local Woolworths and buy a metal soldier for seven cents. Each of those figures is now worth anywhere from $10 to $50.”

But like so many youthful endeavours, Cuthbert put his collection away as he grew older, got married and had children. Decades later, he happened upon an article in Popular Mechanics that dealt with military miniatures.

The article brought to mind the many hours of pleasure he'd had with his own miniature collection. Cuthbert promptly bought a couple of figurines and joined the Ontario Model Soldier Society.

“I started attending meetings and shows, and soon had a nice collection. However, being married with a mortgage and kids, the hobby was becoming too expensive for me.”

It was then that a fellow club member showed him how he could cast and sell his own miniatures.

“It was a fascinating concept,” says Cuthbert. “I started experimenting with figurines of my own. After some trial and error, I managed to produce my first Salvation Army band set, the old Earlscourt Citadel Band in their maroon tunics.”

Cuthbert can spend three to four years researching before one of his figurines is even cast. He has more than 1000 reference books and magazines in his library, plus he scours the internet.

“It’s a lot of late nights,” he says. “And of course, your research has to be historically accurate for the figurines to be of any value. That’s the whole point. 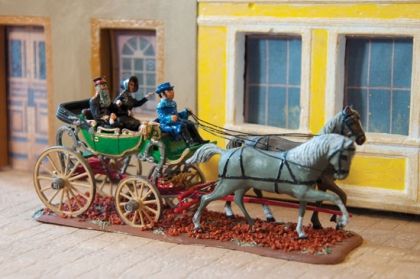 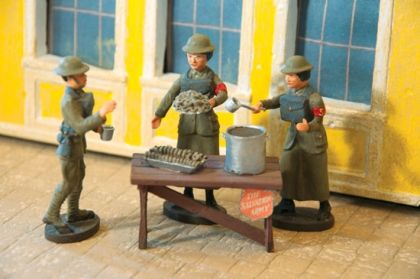 (From left) General William and Catherine Booth take a ride in a horse-drawn carriage. Two Salvation Army lassies in World War One hand out donuts and coffee to a trooper returning from the trenches.

“You have to meticulously do your research, and sometimes sources contradict,” Cuthbert continues. “For example, you’ll have a Napoleonic hussar jacket facing. One researcher will have it one colour while another source will have it a different colour entirely. I need to come to a consensus before I continue.”

Only at that point does Cuthbert start on the actual sculpting and moulding. He uses typesetters’ metal for its malleability and detail and, if care is taken, one mould can cast up to 800 copies. After that comes the filing, finishing and painting.

While Cuthbert is starting to concentrate on biblical history, his first love remains Salvation Army figurines, especially the bands, as he was himself a member of the Canadian Staff Band.

“Right now, I’ve got an order from a Salvationist for the Canadian Staff Band at the time when the client’s father was in it. I’ll cast that set, right up to and including the tiny music stands.”

This article appears courtesy of salvationist.ca